The Amazon rainforest in the State of Maranhão have lost in the last 26 years an area equivalent to little more than the total area of the State of Sergipe. From 1988 to 2014, about 2.4 million hectares were deforested in the state according to the Project of monitoring the deforestation in the Amazon (Prodes), from the National Institute for space research (Inpe). Cattle ranches, charcoal kilns, illegal logging and plantations occupy today parts of the AltoTuriaçu, Araribóia, Awá and Caru indigenous lands, and are the main challenges to the protection work of uncontacted and recently contacted indigenous peoples that inhabit the region. Map of indigenous lands where the CTI project operates in Maranhão.

“In the State of Maranhão, all indigenous lands suffer great pressure of the surroundings. In the case of TIs Awá, Araribóia and Caru, through which pass hundreds of illegal roads, there are invasions on almost the entire area. The great challenge to ensure the autonomy of isolated indigenous peoples that live there is to make the protection along with other State institutions, especially in the wood issue, “says Maria Gavião, substitute Coordinator of the Awá-Guaja Environmental Protection Front (FPEA/Funai).

Until recently, parts of the areas today cleared were occupied and called by the Awá-Guajá Indigenous People of harakwá or “place I know”. The Awá-Guajá territory is not set by the borders created by the non-indigenous national society, either by the notion of ownership of portions of land. On these “places that I know” the Awá established relationships with plants, animals and other people, besides other beings inhabiting other levels of the cosmos, says Uirá Garcia, Member of the Centro de Estudos Ameríndios (CEstA/USP) and professor at the Federal University of São Paulo (Unifesp).

Contacts with some Guaja groups date back to the late 1970. Before that, they lived through the woods of the Caru, Pindaré and Gurupi rivers, running away from the karaí (non-indigenous) and its “phlegm” – as they referred to the catarrh brought by them. Even in this period, they have established relationships with the surrounding populations, small farmers occupying the region.

The Guajá people is primarily hunter and collector. Hunting is the basis of social life and determines the pattern of traditional occupation of the territory. “The territory is cut by roads, many of them invisible to the outside. A turned twig, a brand of a tree is already a trail for them. It carries all the knowledge of grass, zoo and toponymic, even the shamanic knowledge, once several forest animals have celestial correspondents”, says Uirá Garcia.

Even with the demarcation of indigenous lands in the region, the Awá-Guaja, today divided between recently contacted and isolated groups, are increasingly holing up on the various pressures on its territory, whether are they legal initiatives of infrastructure works and exploitation of natural resources or the various invasive ilegal fronts. 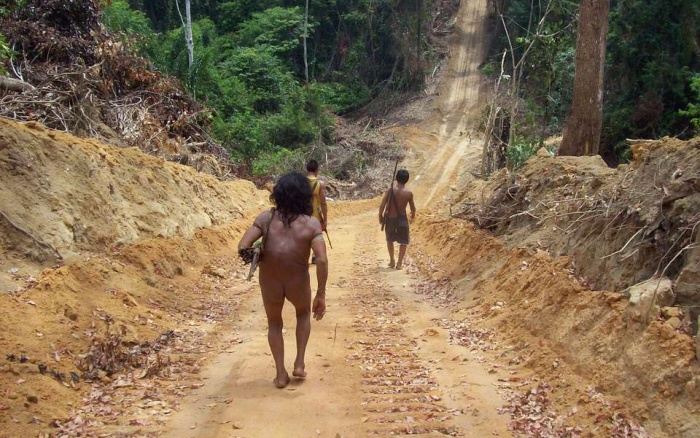 The forest on fire

In October 2015, the Araribóia indigenous land suffered a major fire which lasted the entire month. Of the 413 1000 hectares of forest, 220 1000 (53.2%) were destroyed. The loggers are singled out by the Brazilian Institute of environment and renewable natural resources (Ibama) as the main responsible for the beginning of the burn.

It is occupied primarily by Guajajara and has confirmed presence of about 80 Awá-Guaja living in voluntary isolation. With much of the territory in flames, the strong presence of firefighting brigades, helicopters, airplanes, in addition to the presence of many non-indigenous, certainly affected the lives of isolated Guaja and could cause further trauma to their relationship with the non-indigenous society.

In fighting the fire, indigenous groups are organized to monitor their territories. They are known as the “Guardians of the Forest”. “In the Araribóia and the Caru lands the indigenous are making the protection of their own territory, and also aimed to help ensure the autonomy of the isolated groups. It’s been a very interesting experiment this initiative in partnership with Funai and other state agencies”, says Maria Gavião.

Guardians of the Forest in firefighting activity in the Araribóia Indigenous Land (photo: CTI Collection).

The Maranhão portion of the Amazon has an old non-indigenous occupation. According to the article “the loss of the Harakwá and the Misery of the world” by Uirá Garcia, published in the book Indigenous Peoples of Brazil (2006/2010), from the Instituto Socioambiental (ISA), the Awá-Guaja face four major threats: the overthrow of the forest cover by squatter settlements for planting; large-scale deforestation, and often with the use of slave labor, caused by businessmen and farmers; woods of maçaranduba, Jatoba, ipê and pau d’Arco extracted from the Awá, Caru and Alto Turiaçu indigenous lands to power sawmills in Paragominas (PA) and Buriticupu (MA); and the presence of drug dealers and major marijuana plantations, such as found by the Federal Police in 2009, in an area of 10 km ² inside the Alto Turiaçu indigenous land.

The data of the deforestation in the region help to understand the higher occurrence of isolated Awá appearances. Uirá Garcia believes that the change is not in the isolated itself, but in the context where they are inserted: “Today has appeared much more evidences of isolated groups than before. The impression is that this recurrence of cases is directly linked to the increase in invasions and the pressures on the environment. Today the isolates are showing up in the communities contacted because they don’t have nowhere else to flee.”

As an aggravating, the slash-and-burn agriculture predominates as the main system of cultivation of rice and mandioca for the subsistence of the families in Maranhão. In recent years there has been massive investment of federal resources on family agriculture, regionaly responsible for 93% of the coffee production in the State, 89% of rice production and 86% of mandioca and swine, according to data from the Ministry of agrarian development. This investment comes without regard to handling projects and alternative models of cultivation, whereas in the case of indigenous territories.

A noise that does not comes from the forest

The main infrastructure work in the region is the Estrada de Ferro Carajás, opened in 1985 and that currently undergoes replication works. The railroad passes through the edge of the Caru Indigenous Land, area in which formerly the Awá-Guaja passed back and forth freely. The studies of the works were started in 1974, and to facilitate the construction of the railway, the Attraction Front of Funai united the dispersed groups in the same indigenous land. The Brazilian State policy aimed to take the Indigenous cut off from the road to promote the Companhia Vale do Rio Doce, then a State-owned company.

The road connects the largest iron ore open sky mine in the world, in Carajás, southeastern Pará, to the port of Ponta da Madeira in São Luís (MA). The giant freight trains can be heard kilometers away into the indigenous land, directly affecting the lives of natives for hunting animal scarers, the main food of the isolated Awá-Guaja. “They say that hunting there on the edge is paranoid, the animals are like frightened zoo animals. The animal is alert with any noise. They call these animals ‘mad hunting’, is more difficult to catch because they are more used to human presence and, above all, with noise. To hunt in a quiet way, they are having to move far away from the villages”, reports Uirá Garcia. Seven indigenous people of Maranhão interditam the Carajás railroad. The stretch of track blocked passes through the village Maçaranduba, indigenous land-REE (photo: Justice on the tracks).

The situation tends to get worse with the doubling of the railway, which will increase proximity to indigenous territories. “The duplication will bring more problems to the Awá: the increasing of the noise, driving the local economy, which will attract more people, who will invade more indigenous lands for hunting or fishing”, says the anthropologist.

In this way, the lives of isolated indigenous groups in the region becomes increasingly difficult. In early 2015, a group of three Awá-Guaja isolated that were surrounded by loggers sought contact on the Caru indigenous land. It was a family: a teenage boy, his mother and his grandmother. The oldest avoided contact since the mid 1980. The Awá-Guaja already contacted fear for the life of their relatives, because they know the fear and the difficulties in which the isolated are passing.

It is a survival. They feed with what they can and flee from the action of the non-indigenous in an attempt to continue to live freely according to their customs. Seeing the forest succumb, the Guaja does not fear only for their lives, but for other beings that will cease to exist too. On the Awá-Guaja mythology there is a celestial population, a group of humans who live in heaven. Despite living in another level, the Karawara, as they are called, hunt on the Earth and depend on the forest to survive.

“For the Awá-Guaja, everyone will one day be a Karawara. Is the fate of mankind. When I die, I’m going to heaven. I’m going to pass trought some rituals and I’m going to be reborn and live forever in heaven. So, for them, paradise, what awaits you after your death, even this place is threatened”, explains Uirá Garcia.

For the anthropologist, the very humanity of the Awá-Guaja is in risk. “The forest awakens the memories of their ancestors, that’s where they learned to hike, to hunt and to listen to all that is around them. The Awá have a very beautiful tradition: when a child begins to take his first steps, the father takes the little one into the forest and back home. The other day he takes him a little longer and come back home. In another day he takes him even longer, they sleep there and then come back home again. There is an education in this walk”, concludes.