Reportage and translation by Nathália Clark

The Purus River extends for approximately 3700 km in the Brazilian Amazon. The region known as Médio Purus (the middle course of the Purus River) covers the municipalities of Boca do Acre, Pauini, Lábrea, Tapauá and Canutama, in the southern state of Amazonas. Showing high levels of conservation, the area was, until recently, virtually invisible for the authorities and the Government projects. Its population is composed mainly by settlers, “ribeirinhos” (riparians) and indigenous people such as the Deni, Banawá, Apurinã, Paumari, Jamamadi, Jarawara, the recently contacted group Suruwahá and the isolated Hi-Merimã people, who inhabit the indigenous land that has the same name.

It was during the first period of expansion of the rubber economy, in the late 19th century, that non-natives began to effectively occupy the river banks and the process of incorporation of the region to the national and international markets began to intensify. This occured at the expense of natural resources and the life of the people who lived there. Most of the indigenous of the Purus basin were eliminated by gunfire or by diseases brought in the occupation process, or were compulsorily introduced in the “latex” extraction activities.

This region concentrates one of the highest rates of biodiversity in the Amazon, with high flora and fauna indicators, with more than 170 species of mammals and over 550 species of birds. In recent decades, however, the political and economic scenario of the Médio Purus region is going through rapid and radical transformation, which has directly affected its socio-environmental context. 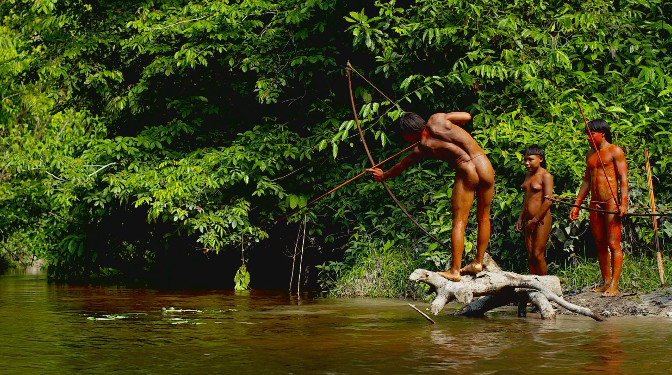 Currently, the implementation of highways BR-364, BR-319, BR-317 and BR-230 (Transamazônica) has made easier the access to the region, what has increased the expansion of the agricultural frontier and other degrading activities such as the illegal exploitation of timber and livestock, which brought significant changes in the patterns of use and occupation of the soil.

According to the summary of the detailed report for identification and demarcation of the Hi-Merimã Indigenous Land, since decades prior to 1994, “indigenous lands Banawá and Jarawara/Jamamadi, and the territory of secular occupation of the non-contacted group have been severely assaulted by the savage exploitation of the ‘white man’. (…) [Made initially on the lower course of the rivers] the logging activitie would be developed in the high courses and streams, becoming a constant threat to the isolated groups.”

Cloude Correia, coordinator of the indigenous peoples programme of the Instituto Internacional de Educação do Brasil (IEB), which operates in the region for more than a decade, says the region remained on invisibility for a long time, being used in a sustainable way, until there was a change of economic paradigm. “There was a prior indigenous occupation and then, with the creation of rubber plantations, a population of ‘ribeirinhos’ and extractivists. From the 1960’s, entered in Médio Purus a wave of loggers, land grabbers, settlers from the South of the country, farmers and grain producers, who brought with them the logic of a more intense exploitation of natural resources”, he says.

Regarding the presence of civil society organizations in the region, in addition to the IEB activities, stand out the actions of the Conselho Indigenista Missonário (Cimi) and the Operação Amazônia Nativa (OPAN), which operates there since 1992.

The Hi-Merimã people are a reference confirmed by Funai of isolated people in the Médio Purus. Today living in that condition, in the past they have been in contact with the Western civilization, being estimated at around a thousand people in 1943. They were considered one of the largest groups in the region, but have returned to voluntary isolation. Also known as Marimã or Merimã, it is estimated that the group currently has between 40 and 80 individuals.

As quotes the ‘Caderno CEDI – Terras Indígenas no Brasil’, from November 1987, the Hi-Merimã people “are located between the right bank of Riozinho and the head of the Piranhas river, in the municipality of Tapauá (AM), near the Suruwahá villages but without contact with them. The Marimã were already mentioned in the 30’s by the SPI [‘Serviço de Proteção ao Índio’]. They had contacts with the regional about 15 years ago. As a result of the deaths that came after those contacts, they have retreated to the interior. Since 1983, they leave traces in the region of Riozinho and Piranhas rivers.”

Longhouses from the Suruwahá prople in the middle of the forest (Photo: Gary Rodgers).

According to the report for the identification and delimitationof the indigenous land, all points out that, in the decades after 1950, this group was massacred by the exploitation of natural resources in their territory, being expelled, plundered and decimated by the greed of the invaders. The occupation of the region for exploitation of plant products, hunting and commercial fishing has forced them to a radical change in their habits.

“The violence of the Brazilian developmental policy is certainly one of the reasons to have so many peoples in retreat in the country, but the factors that influence this behavior are more complex. Linguistic diversity, cultural barriers, interethnic wars and geological issues are elements that may have led to the isolation many populations around the world throughout the history of mankind, not just over the past 500 years in Brazil”, explains Daniel Cangussu, current coordinator of the ‘Frente de Proteção Etnonoambiental Madeira-Purus’, created in 2009 to act in the areas of the isolated Hi-Merimã people and of the recently contacted Suruwahá.

For him, the protection of isolated peoples is based on the maximum manifestation of the human rights. “I think there is no and there never was a ‘real’ isolation, but rather a process of permanent refuge from these people. To protect the isolates and to respect this manifestation of human individuality is to defend our own ability to be plural”, declares Cangussu.

“I don’t know any isolated people. This language of yours, white men, I don’t use. They are free and independent peoples. That means they don’t want contact with the outside world, do not want to be dependent on the non-indigenous, they want to walk in their territories with all the freedom that can be achieved in nature.”

In the focus of deforestation

Figuring in the region called “arc of deforestation“, Lábrea is the city champion of forest destruction in the Amazonas State since 2003, according to the Instituto Nacional de Pesquisas Espaciais (Inpe). And it was from that date that, for the first time, the city became the focus of attention of the authorities.

“Nowadays this region cannot live in that old invisibility, this potential to ‘be isolated’ no longer exists, is a region that will be increasingly integrated to the national context. Now we must think about how, in this new developmental scenario of cattle ranching, logging, federal highways and other projects, create conditions for the people who live there to have a quality life and can continue to live according to their own traditional culture. This is the main challenge”, says Cloude Correia.

He explains that, generally, the fronts of economic expansion move forward to where there is a legal vacuum, that is, areas not yet regularized in terms of land. And thus begins a process of land grabs, expulsion of the small producers, invasion of indigenous territories and of resistance to the creation and implementation of protected areas. “Because of the lack of economic alternatives, most of the regional population ends up getting involved with these fronts and adopting their social and economic logic, which generates also a cultural impact. When you combine all these fronts in the same region is like throwing there a molotov cocktail”, argues Cloude.

The surroundings as an ally

In contrast to the fronts of economic expansion, the region houses a set of contiguous protected areas between conservation units and indigenous lands, very significant from an environmental perspective and significantly biodiverso, bringing together four million hectares. These areas, however, are in a situation of vulnerability, since many are not properly implemented or do not have their land property regularization process completed, remaining without supervision or appropriate territorial management. For Cloude Correia, if this situation was reversed, this mosaic could be a favorable factor to stop or minimize the process of expansion of these fronts and, consequently, the impacts generated to regional populations and also to the isolates. 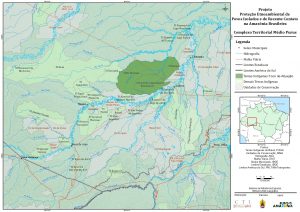 Map of the region with the indigenous lands where CTI focuses its activities.

Daniel Cangussu, in his turn, believes that this is one of the main factors causing a possible contact by the isolated, but not the only one: “there are cases in which the isolated peoples are so trapped by fronts of deforestation and land grabs that act on their territories, that proceed with the contact is no longer an option and represents a last stand in the quest for survival. I do not believe, however, that we need only a tense environment so that human relationships can happen. Quite the opposite. Also the so-called ‘mysterious’ uncontacted indigenous are made up of families: they are fathers, mothers, children and especially teenagers, full of curiosity about other worlds, other beings and the unknown. More than enough reasons to seek the contact with us.”

Reports show that the Jamamadi, for example, coexist with the Hi-merimã people for many years. They meet, dialogue and return to their respective locations. “When we have people who share the same habitat, that keep meeting and it does not bring up any disorder, there is no reason to choke these exchanges,” argues Zé Bajaga.

“We see clearly that the greatest threat here in the region is the extraction of natural resources in our territories by non-indigenous. The challenge is to get people who come from other parts of the country to understand that. They should learn about how we live, our daily life and shouldn’t come thinking they know everything. We, the peoples that live in the surroundings of the isolates, we’re not threatening them, we collaborate so that people from outside do not enter the territory and not do things that will assault all the peoples that live there. When we make it our way, there is a balance with nature. When it comes to these other people’s hands, what happens is a major imbalance. And that’s what we want to avoid”, he concludes.

Artigo Anterior Vale do Javari: the highest concentration of isolated indigenous peoples in the world
Artigo Seguinte Envira: from the ‘correrias’ to the economic integration projects
×