Of the 36 indigenous lands in the state of Acre, 12 form a continuous entirety of areas that are permanently or seasonally inhabited by uncontacted indigenous peoples. Most of them are located in the high streams of tributaries of Purus’ basin and Juruá’s basin in the border region with Peru. The Frente de Proteção Etnoambiental Envira (FPE Envira – “Ethno-environmental Protection Front” Envira) is one of the five Fronts of Fundação Nacional do Índio (Funai -National Indigenous Foundation) located in border regions. 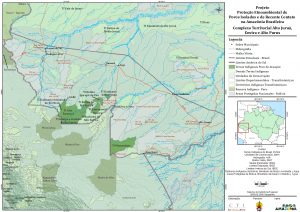 Map of the region with the Indian lands of CTI’s focus.

In 2008, when performing a flypast by the area of the headwaters of Igarapé Xinane, next to parallel 10° S, high River Envira, Funai has localized two new longhouses of isolated indigenous people. One of them had been built recently and the then Coordinator of the FPE Envira, José Carlos Meirelles, pointed out the possibility of the isolated indigenous people’s migration to Brazil due to the pressure of illegal logging and the presence of drug traffickers at the headwaters of Envira in the Peruvian side of the border. In previous years, the FPE Envira had found wooden planks and products arising from Peruvian’s logging camps in the upper Envira.

The illegal exploitation remains active in the territories of isolated indigenous peoples in Peru. The more inaccessible areas of the forest are the illegal logging target due to the occurrence of mahogany and other hardwoods of higher commercial value. “It is precisely in the isolated’s territories, the most preserved forest areas, where the loggers want to reach. They are finding these isolated indigenous peoples and we don’t know what’s going on. Recently contacted indigenous ones say that some encounters are happening and conflicts are taking place”, reports Maria Emília Coelho, journalist of the Comissão Pró-Índio do Acre (CPI-AC), organization that operates in the region for more than three decades.

Besides the clandestine logging some companies are operating in the region by forest concessions of the Peruvian Government. “In Peru, the indigenous territories are not of exclusive use, there are operating concessions granted by the State, both loggers and oil as well as mining”, completes Maria Emília.

Another growing threat to the indigenous peoples in this region is drug trafficking, which has intensified in recent years. Peru is among the largest producers of cocaine in the world and Acre’s border is one of the preferred routes for the flowing of this production. Inevitably, these routes cross the territories of isolated indigenous peoples. In 2011, the FPE Envira team was forced to abandon the Base de Proteção Etnoambiental Xinane after being confirmed the presence of armed men. At the camp used by the drug traffickers, the Polícia Federal (Federal Police) found, among other things, arrows that belonged to the isolated, an indication that they had contact with the indigenous.

Such activities are provoking changes in the dynamics of occupation of the isolated peoples in this border zone, increasing the occurrence of contacts and conflicts in recent years. 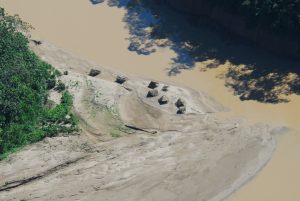 Miserable huts of isolates seen in Peruvian side of rio Envira (photo: CGIIRC/Funai).

Between June and July 2014, the contact of one isolated group – until then named by Funai as “isolated of Xinane” – occured with the Ashaninka of the village Simpatia in the upper River Envira. The contact was escorted by a task force formed by Funai servers, interpreters from Jaminawa folks, officials from Special Secretariat for indigenous Health (Sesai) and a doctor of the Escola Paulista de Medicina da Universidade Federal de São Paulo (EPM/Unifesp). The priority of this team was to perform healthcare on the Tsapanawa people – which is how the “isolated of Xinane” call themselves, according to the indigenous interpreters. On that occasion, the Xinane Base was reactivated and served as a foothold for the treatment of infections caused by the contact and for the Tsapanawa’s medical follow-up. 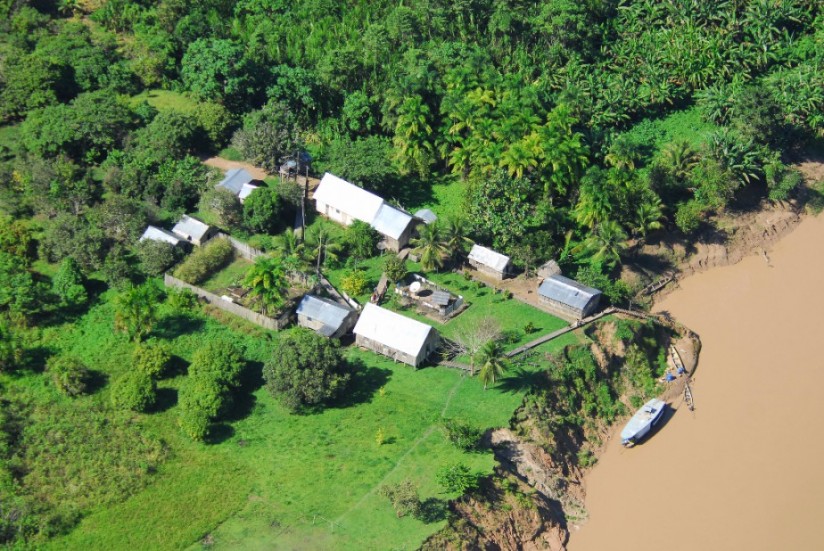 Zé Correia, indigenous from Jaminawa people, participated in the task force as a translator, since the language spoken by the Tsapanawa also belongs to the linguistic family Pano. To the Blog da Amazônia of Terra portal, Correia told that the isolated ones with whom he spoke were afraid of being the target of new attacks, traumatic memories of contacts with loggers and drug traffickers that resulted in the death of many indigenous.

This contact, as well as others that are recently occurring in other regions, illustrates the challenge and the need to intensify the dialogue with the indigenous peoples inhabiting the immediate surroundings or sharing the territories with the isolated ones. The well-being and participation of these peoples are essential to ensure the protection of the isolated ones – to permit, for example, the avoidance of recurring contagion situations caused by the encounter and characteristic exchanges of these contacts, and develop joint strategies for protection of the peoples involved. Indigenous people Tsapanawa who established contact with the Ashaninka in July 2014 (photo: CGIIRC/Funai).

Memories of the caoutchouc economy

The memory filled with traumas from the contact with other societies is common to the isolated indigenous peoples and those already contacted. Before the arrival of the non-indigenous in the Envira’s region, these people, mostly Pano and Arawakan language speakers, occupied the headwaters of rivers Acre, Iaco, Chandless, Purus, Juruá and Envira. The arrival of latex rubber exploration fronts marked deeply the lives of indigenous peoples and the social landscape of this border region.

In the economic rubber’s boom context in Amazon, at the turn of XIX-XX centuries, intensifies the meetings, contacts, conflicts and alliances of many peoples in the region with the occupation fronts of rubber collectors and rubber plantation proprietors of Peru and Brazil. The isolation strategies of some peoples retain relations with the frequent conflicts with these new occupants’ arrival. “In the time of the rubber plantations, in that first moment of the indigenous territories invasion in the region, in the 19th century, these peoples managed to escape, climb to the headwaters of the rivers,” said Malu Ochoa, Coordinator of CPI-AC.

The escape was not always possible given the violence of the “correrias” (“forays”) – killings of indigenous organized and financed by rubber gatherers. According to the article “Índios isolados no Acre e seus territórios”, by José Carlos Meirelles, published in the book “Povos Indígenas do Brasil” (2006/2010) of Instituto Socioambiental (ISA), the Jaminawa people report that the first contacts with the non-indigenous came by a rifle Winchester 44.

In an uneven war, many Jaminawa were forced to surrender to the Peruvians caucheros that were operating in the headwaters of the rio Purus. The diseases brought by whites, such as measles and influenza, killed more than the rifle. Tired of being exploited by caucheros, the Jaminawa were living at the headwaters of River Iaco, in Brazil, but this time they were exploited by Brazilian rubber gatherers. Meirelles still tells that a small part of the Jaminawa people hadn’t gave up and maybe lives till today isolated between the headwaters of the rivers Purus and Juruá, occupying part of their former territory between Brazil and Peru.

The story of many Jaminawa’s deaths, pressured by caucheiros and rubber gatherers, was repeated with several other peoples in the area, as the Kaxinawá, Kulina, Manchineri, Apurinã, Katukina (Pano) and Yawanawá. It is in this context that happens the isolation of many other groups that have managed to take refuge at the headwaters of rivers and running away from the “correrias”.

“They fled the attacks from agents who went after them to enslave them, to make them work on the rubber exploration. Fled to more inaccessible locations in the forest, to the riverhead of the tributaries of major rivers, and some groups are there since then. They are the children and grandchildren of the indigenous who managed to escape these incursions by armed organizations of rubber proprietors and caucheros “, explains Maria Emília Coelho.

Over time, the isolates began to recompose in terms of population and re-occupy parts of their traditional territories. In the last twenty years, the FPEEnvira’s work of protection and monitoring has enabled this re-composition. But it doesn’t mean the pressure ceased to exist. “For a long time they managed to maintain their way of life. When starting a new paradigm of occupation of the Amazon, also starts what we call a “new moment of ‘correria‘”, of logging, mining, drug trafficking, a new dynamic on the border, which influences the displacement and mobilization of those peoples. Today, every moment we have news of new sightings close to communities already contacted“, reports Malu Ochoa. 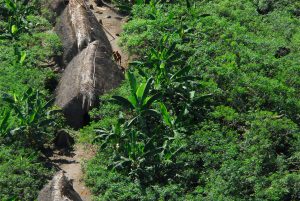 Longhouses and isolated sighted in 2014 in the upper rio overflight in Envira (photo: CGIIRC/Funai).

In addition to the illegal logging and drug trafficking there are also, in this region of Western Amazon, initiatives to promote the regional infrastructure integration, including construction of roads, railways and dams, and the viability of oil and minerals exploration.

It’s the case of the initiative for the “Integração da Infraestrutura Regional Sul-Americana (IIRSA “South American Regional Infrastructure Integration), recently replaced by the Conselho Sul-Americano de Infraestrutura e Planejamento (COSIPLAN “South American Infrastructure and Planning Council”), organ of the Union of South American Nations (UNASUR). Lumber companies are lobbying for a highway project approval that would link the interoceanic highway that goes from Assis Brasil (Acre, Brazil) to Lima, Peru, with another one that would go from Puerto Esperanza, located on the Peruvian side of River Purus, to Iberia. Therewith, the isolated indigenous territories would be surrounded by roads that would make possible the wood’s flowing and facilitate the penetration of natural resources’ exploitation fronts.

Besides the projects that affect the isolated indigenous surrounding territories, there are others that would directly affect these areas. “One of these projects is the construction of a railroad linking Brazil to Peru. It’s not yet agreed but the railroad’s track proposals crosses territories inhabited by isolated indigenous groups.“ says the journalist Maria Emilia. The connection railroad or road construction proposal’s between Cruzeiro do Sul (Acre, Brazil) and Pucallpa, Peru is planned for some years in IIRSA’s project portfolio/COSIPLAN. Recently, China beckoned with the possibility of funding this venture and, in November 2014, was created a trilateral working group with Brazil and Peru to study its feasibility.

If on the one hand the economic and infrastructure integrations has great support of the Governments of Peru and Brazil, on the other, bilateral cooperation for protection of the territories of isolated indigenous peoples is not seen with the same interest and priority. In March 24th 2014, Funai and the Ministry of Culture of Peru signed a “Memorando de Entendimento para a Cooperação Interinstitucional para a Proteção e Promoção dos Direitos dos Povos Indígenas Isolados e de Recente Contato”, but little progress has been achieved in order to accomplish joint actions and establish permanent mechanisms of information exchanges and territorial monitoring.

“Who’s thinking about conservation, the protection of indigenous peoples, is a minority. It emerges very little in the Government agendas and, even so, there is nothing in practice“, opines Malu Ochoa.

The counterpoint are the initiatives of indigenous organizations with the support of civil society organizations. “There is a proposal of the indigenous organizations of Peru for a “Corredor Territorial para Povos Indígenas Isolados e de Recente Contato Pano, Aruak e outros” (Territorial Corridor for Isolated Indigenous Peoples and of Recent Contact Pano, Aruak and others). The protection plataform for the isolated indigenous peoples proposes this binational territorial corridor. The proposal is an area that covers Acre, Brazil and three states in Peru, Madre de Dios, Ucayali and Cuzco “, says Maria Emília.

In the last years, this and other initiatives articulated between indigenous and indigenist organizations have contributed to guide public policies regarding the protection and promotion of the rights of indigenous peoples in Brazil-Peru border region.