In order to widely publicize the news circulating in the media from Brazil, Peru and other countries about the State policies for protection and promotion of the rights of isolated indigenous peoples in the Amazon and other matters related to the topic, Centro de Trabalho Indigenista (CTI) developed monthly, since 2008, the digital newsletter ‘Povos Isolados na Fronteira Brasil-Peru‘.

It was seven years of periodic editions under the project ‘Cross-border – territorial management of indigenous lands and protection of the rights of isolated indigenous peoples in Brazil-Peru’. With the end of this project, the bulletin will have its continuity incorporated and amplified by the digital newsletter ‘Povos Isolados na Amazônia’, a product developed within the project ‘Environmental protection of uncontacted indigenous peoples in the Amazon’, runned in partnership with the Fundação Nacional do Índio (Funai) and with the support of the Amazon Fund.

The objective of this platform is to be a communication channel to concentrate and disseminate news, interviews, articles, maps and pictures on the issue, with the collaboration of indigenous partners, Government representatives and civil society in countries such as Brazil, Bolivia, Colombia, Ecuador, Peru, Suriname, Venezuela, Guyana and French Guiana, in order to strengthen the links between all those who somehow, fights for the rights of these peoples.

The contents published in this bulletin is intended for different audiences, in order to clarify and inform about the effective existence of the “isolated” indigenous peoples, the threats and the challenges for their protection. They are: the State – or certain sectors of it, particularly the Executive, that ignore or deny the existence of these peoples; indigenous peoples and regional populations that occupy the immediate surroundings or who share territorial spaces with the “isolated” groups; and last but not least, the public opinion and civil society in general.

With this new tool, we will continue to disseminate information about policies or initiatives for the protection of isolated indigenous peoples, contact events, challenges and threats to their territories, in order to expand the debate and defence of their rights in all spheres of society, particularly in the Amazon.

In this first edition of the newsletter we present the context of the main areas where the project operates as regards the connection with the surrounding communities that share territory with the isolated groups. These are the areas of the Frentes de Proteção Etnoambiental Envira, Vale do Javari, Awá-Guaja, Cuminapanema and Madeira-Purus, in addition to the international border regions. 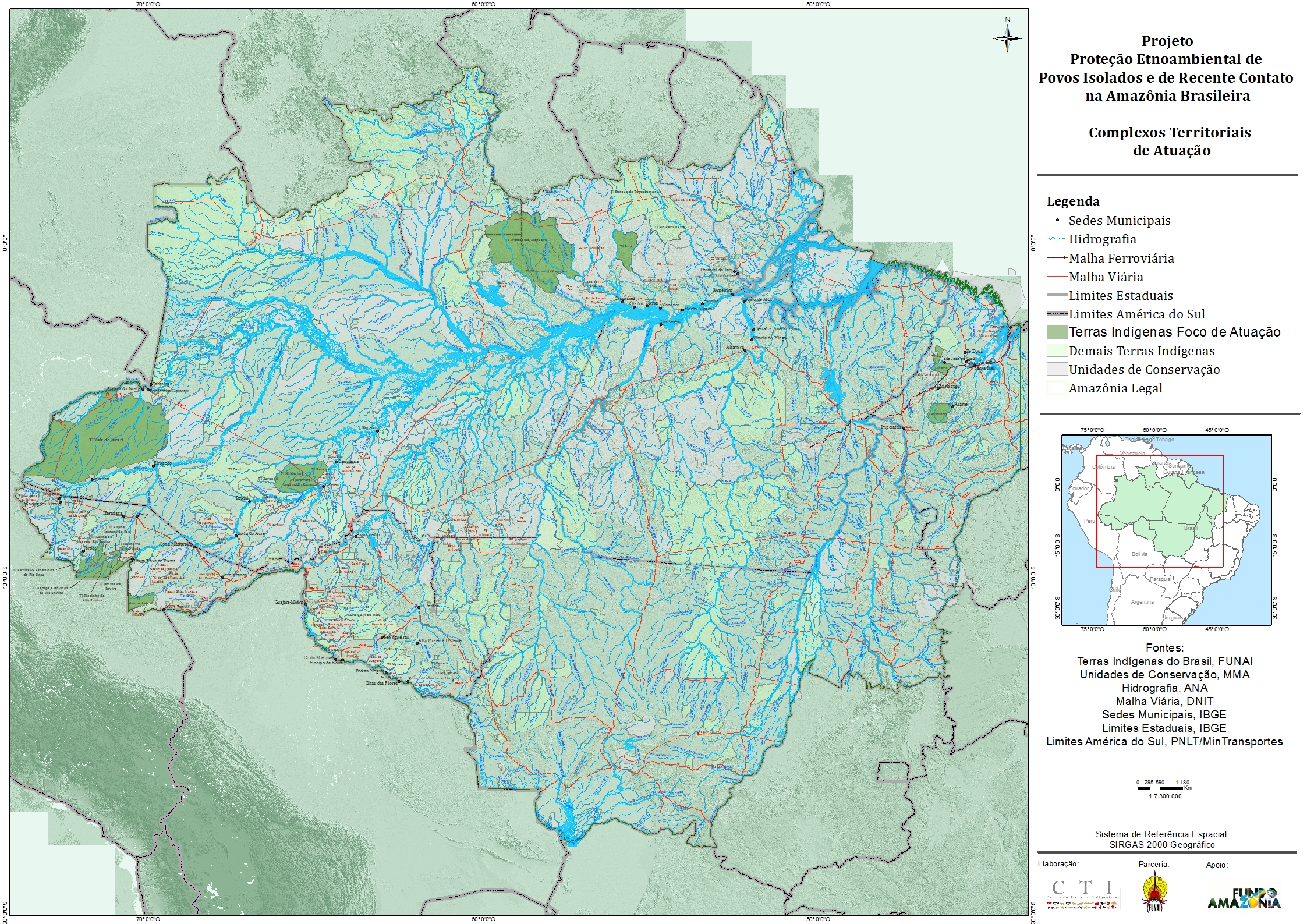 Map with the indigenous lands where the project operates.

The CTI and the isolated protection policies

The CTI’s history political commitment is “to help indigenous peoples to assume effective control of their territories, clarifying them about the role of the State in the protection and guarantee of their constitutional rights.” Is a clear position in favour of autonomy and self-determination of indigenous peoples. Of course, the means for such a clarification in the context of the “isolated” indigenous collectives are quite different from those used in other contexts, especially in the relationship with the people “in permanent contact with our society” (placed by law 6,001/73, Estatuto do Índio).

To begin with, we understand that the legal category “isolated” refers to the isolation of indigenous collectives thus identified in relation to the State and the non-indigenous majority society, as an expression of the refusal of these collectives to establish certain relationships. This does not refer, therefore, to these same societies – or other indigenous collectives with which they maintain or have maintained relations –, which, without no doubt, are not, or see themselves as “isolated”. Anyway, for these cases, in principle, we believe that State intervention should be more incisive, aiming to ultimately ensure the necessary conditions for the preservation of the life and physical integrity of these groups.

We assumed that there are different forms of intervention to the contexts of “contact” – being fundamental to qualify them. The history of relations between indigenous peoples and the dominant society illustrates and describes a set of State intervention, since the colonial era until today.

In the first decade of 1500, all indigenous people were “isolated” according to the conceptions through which common sense and the law 6001/73 defines them: naked or with summary clothes, that didn’t know the rules of the “white” society, that does not produce metal instruments, that fought frequent wars among themselves and, perhaps for this reason, were considered “autonomous societies” in relation to each other.

Throughout the occupation and colonial domination, the Portuguese State invaded, raped and murdered, for after all dress and “civilize” these native americans. They wanted the indigenous to become and acquire the image of the “whites”, especially where indigenous resistances were bigger and were causing the Portugueses death. Over this destruction of bodies and cultures were created the Nation States that we call nowadays as Brazil – and also Peru, Mexico, Paraguay, United States and others.

Hundreds of indigenous people have succumbed to attacks of mercenaries with support from the State. In the South, Southeast and Northeast of the country, many were “reduced” in the Catholic missions to then serve as slaves in the sugar mills; others were “descended” from high Amazonian rivers to the missions, forts and fortresses to be enslaved; others were “corridos” by punitive expeditions, hired by rubber gatherers to “clear” access to Latex. The more contact there were, the more they realize how much these “brave” indigenous (or “savages”, “hostiles”) were susceptible to the most mundane diseases of white society.

In the early 20th century, it became customary practice of “pacification” – an euphemism used at the time to replace the word domination. Precisely in this period, in 1910, was created the Indian Protection Service (SPI). The SPI has made the “pacification” their main modus operandi, tactic that would be widely applied in the Amazon in the 70’s, especially where the “roads of national integration” found “the brave”.

Attraction techniques then in vogue were used: freebies panels mounted at strategic locations; establishment of permanent bases in indigenous territories, the so-called “Attraction Fronts”; and the capture of individuals (men, women or children) of a group to serve as an example. The “Pacification” and “Attraction Fronts” of the SPI lasted until the burial of this organ, in the military dictatorship, when it was replaced by the National Indian Foundation (Funai), in 1967.

This did not mean, however, that the illegal and little disclosed war from the private conquest fronts (including missionaries of various creeds), composed in its front line in the South of the country by the so-called “bugreiros”, has been discontinued. Where the national State (SPI) didn’t have legs – and above all, money –, these punitive expeditions had continued, especially in the Amazon, the “last frontier” where there was the presence of “brave indigenous” to be conquered.

At that time, the so-called “Pacification Fronts” began to be called “Attraction Fronts”. In the 60’s that name changed again and was replaced by “Fronts of Contact”. On the Sydney Possuelo management as head of the Isolated Indians Department of Funai, the nomenclature of “Fronts of Contact” was changed to “Environmental Protection Fronts” (Frentes de Proteção Etnoambiental, in Portuguese), as they are currently called. Recently, with the Presidential Decree No. 7056, of 28 December 2009, was formed the General Coordination of Isolated and Recently Contacted Indigenous Peoples (CGIIRC) of Funai, (held in Presidential Decree No. 7778, July 27, 2012).

The context of the policy of “Amazon integration” of the military Government would repeat, of course in a lesser extent, what the initial colonial invasion did. In short terms, the Brazilian State along its pre-1988 Republican history had no political will to formulate a clear objective regarding the issue of the “isolated”, except that of the “integration”, which was, in its turn, applied to all indigenous peoples in Brazil.

With the re-democratization process after the dictatory period – and even before the promulgation of the Constitution in October 1988, who in his chapter No. 231 buries “the integration of indigenous peoples to national communion” as a goal and objective of the indigenous official policy – , acknowledged that the contacts conducted by the State throughout history have been overwhelmingly negative for these peoples. From there, Funai decided to finally establish the objectives of the State regarding the “isolated”.

The Ordinance No. 1,900/87 layed down the guidelines for the activities of the Coordination of Isolated Indigenous Peoples of Funai. By the Ordinance No. 1,901/87 it was layed down the Isolated Indigenous Protection System and their subsystems and monitoring contact, and established that the contact could only be done on the initiative of the “isolated” group itself or when they would be in imminent risk.

Therefor it was established a new policy, based on the “non-contact” and respect to the self-determination of those peoples, guided by the Federal Constitution of 1988, the Convention No. 169 of the International Labour Organization (ILO), of which Brazil is a signatory, and by the Estatuto da Funai, approved by Decree No. 7778 of 2012.

On the “option for the isolation”, and in view of the high vulnerability of these groups to disease and the frequent threats to the integrity of their territories, Funai must guarantee their freedom and their traditional activities, without the necessary requirement to contact them, disciplining and restricting the entry and transit of third parties in the territories inhabited by them.

It was due to these new attitudes adopted by the governmental agency, with respect to the autonomy of indigenous peoples called “isolated”, and with reference to previous experiences in the theme*, that, from the early 90’s, CTI began to support some actions of the Isolated Indigenous Department of Funai with projects. These projects have sought to resolve weaknesses and/or shortcomings in the coordination of Isolated Indigenous Peoples in several environmental protection fronts.

* Corumbiara, a film by Vincent Carelli, shows an example of the preview performance of CTI in Funai support with respect to the “isolated” indigenous peoples. Subsequent projects have had their basis on technical cooperation agreements formalized between CTI-FUNAI and officially published in the Diário Oficial da União (DOU).